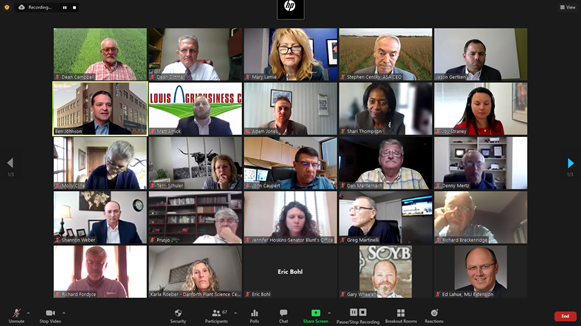 St. Louis, MO — The interconnectivity of different transportation modes and need for reliability in both transportation and broadband infrastructure emerged as key ingredients for continued competitiveness of the U.S. agriculture industry during a virtual webinar hosted by the St. Louis AgriBusiness Club on Oct. 7.

The event provided a unique opportunity for dozens of congressional staffers to hear directly from leaders in the key areas of transportation, technology, agribusiness and farming about the importance of infrastructure investment for the ag industry.

More than 100 attendees gathered online for View of Infrastructure from the Ag Coast of America, which featured a comprehensive discussion on how infrastructure programs can best be implemented to benefit the transportation sector, enhance innovation and technology, and address climate initiatives.

Stephen Censky, chief executive officer of the American Soybean Association (ASA), which is based in St. Louis, moderated the session and set the stage by providing some stats related to soybean movement in the U.S.

He stated that soybean farmers export about 50% of the crop produced in this country. On average, he said soybeans travel for the first 15 miles on roads and bridges in order to get to an export elevator, and then they are transported by rail or by barge on the inland waterways and then on to various ports and harbors, underscoring the importance of the entire transportation network for the movement of this single ag product.

“Agriculture is the largest user of the freight transportation system in the nation, representing 27% of all freight ton miles, and it's expected to increase 23% over the next 20 years,” said Mary Lamie. “During peak season for the agribusiness industry, the efficient and reliable transportation of crops is critical to maximizing yield.”

Lamie is executive vice president – multi modal enterprises for Bi-State Development and head of the St. Louis Regional Freightway, which maximizes multi modal infrastructure funding opportunities through public and private partnerships, working closely with all modes of transportation, manufacturing, and logistics companies, along with the agribusiness industry and departments of transportation.

Lamie added that nearly half of all U.S. crops and livestock are produced within a 500-mile radius of the St. Louis region, where four interstate highways serve its strategic location in the center of the nation, providing a one-day drive or less to Midwest and Southern regions. The rail industry also provides a cheaper mode of transportation for the region.

“We are home to six national or class-one rail carriers that provide access to three West Coast ports and two East Coast ports, and from these ports of export, agricultural customers around the world are served,” Lamie said.

“It may be a surprise to some, but our location in the interior of the country, combined with our rail network to these ports, provide us global connectivity for the ag industry, providing advantages to farmers.”

The St. Louis region also is recognized internationally as the Ag Coast of America due to having the highest level of barge handling capacity for ag and fertilizer products anywhere along the Mississippi River.

Lamie noted that the number one infrastructure project for the barge industry is actually a historic rail bridge, the Merchants Bridge, which is currently undergoing a $222 million replacement, because in order to have competitive barge rates, they need competitive rail rates.

She cited it as a great example of the importance of multimodal connectivity and flexibility and how having the infrastructure to support all modes of transportation is key to compete in that global market.

Attendees also heard from Jason Gertken, director of global and North America corn for Bunge, and president of its joint venture EGT, LLC. Headquartered in the St. Louis region, Bunge is a 200-year old agribusiness and food company that is one of the world leaders in the total global trade selling quality commodity products around the world.

The company operates in 40 countries with more than 23,000 employees and 300+ facilities. Gertken zeroed in on a stretch of the Mississippi River from Minneapolis to St. Louis, which spans 800 river miles over which there is a 404-foot drop in elevation.

Dozens of locks and dams, many of which were built back in the 1930s, help barges to navigate this section of the river, and their successful operation is critical to the nation’s supply chains.

“When one of these go down, essentially there is no other way for the grain to get down the river,” said Gertken.

Gertken also highlighted how efficient and less carbon-intensive movement of products by barge is, providing an example of one barge being loaded at the Bunge SCF facility in Fairmont City, Illinois.

A single barge equates to about 15 jumbo hoppers that would be pulled by train or 58 large semi-trucks.

“When you're sending a barge downriver, you’ve got one tugboat that'll pull it downriver. And it usually has 15 barges in there — that's about a little over two full unit trains of a hundred cars, or about 870 large semis,” Gertken said.

“So, a barge is extremely efficient at moving grain over a long distance at a low fuel cost... and it has significantly less CO2 produced. This is also something that is extremely advantageous to the U.S.”

The advantages of America’s commitment to innovation was also spotlighted during the part of the conversation led by Ben Johnson, vice president, programs at BioSTL, which has laid the foundation for St. Louis’ innovation economy with a comprehensive set of transformational programs leveraging the region’s medical and plant science strengths.

He called attention to various funding mechanisms, specifically highlighting not only the importance of the current infrastructure bill, but also the U.S. Innovation and Competitiveness Act (USICA), a bipartisan bill that has moved out of the U.S. Senate and is being considered in the House.

“USICA, a bipartisan act really aimed at cementing our competitiveness against China, would significantly scale the National Science Foundation and a lot of the investments it's making in better fuels, better energy, a lot of which depends on new crop traits -- biodiesel, soy diesel, et cetera,” Johnson said.

“I think passage and funding of USICA as a way to really enhance the competitiveness we've all talked about, is critical.”

The need to enhance American competitiveness was also top of mind for Dean Campbell, a fifth-generation owner/operator on his family’s farm Agritech Acres, Inc., which produces corn, soybeans, and wheat near Coulterville, IL, about 50 miles southeast of St. Louis.

“Our roads and infrastructure, that transportation infrastructure has been there -- some of it well over a hundred years -- and we need to maintain that at an increasing rate of what we have. There's a lot going on, but we need more.”

Beyond the transportation infrastructure, Campbell also highlighted the need for open markets and investment in broadband, which can be lacking in rural areas.

“It's just frustrating that we can't put in that infrastructure that's usable out here. We have a tremendous amount of data to be looking at, to be transporting out for analysis.”

Adam Jones, a family farmer in Lincoln and St. Charles Counties in Missouri where he raises soybeans and wheat and has a small cow-calf operation, echoed Campbells’ concerns about the lack of broadband access in rural communities.

“If these kids can't have fast Internet, they're not able to compete in today's world and they're going to move to the city, and we can start seeing some of these rural towns just disappear off the map because of today's remote workplace environment,” said Jones.

“And if they're not able to work from their rural areas, then rural America's at an extreme disadvantage.”

Jones also called attention to the need for an improved flood protection system on the upper Mississippi River, north of Cairo, IL, which has a dramatically different flood protection system than on the lower Mississippi River and in recent years has experienced much more frequent flooding, much higher water levels and much faster flooding than before.

“We really need to work towards a fair and equal protection system up here on the upper Mississippi,” said Jones.

“As we continue to have these terrible floods, each one does not only impact farmers, but they're blocking highways, they are going over rail and shutting down railroads, washing out railroads, taking out bridges and things like that. So, it's not just an impact on the farmers, it's a major impact on everybody in all these communities.”

During the question and answer portion of the session, panelists were asked how they see infrastructure investments enhancing innovation and addressing climate challenges, and Johnson weighed in.

“Investments in ag innovation are critical to not only addressing our competitiveness in the food market, but addressing our global climate challenges as well," said Johnson.

"Those investments range from basic science research at the Department of Energy and USDA and NSF, to investments in the infrastructure that make that happen -- labs and greenhouses to test the products.

“There are gaps in turning these ideas into new companies, so investments that help de-risk the technology so the private market can really take them through to consumers, those are really critical investments.”

Gertken added that a great example would be the renewable fuel standards that was enacted a number of years ago that basically generated a whole industry that now uses a third of the U.S. corn crop.

“That caused investments in the rail lines and investments in all the little towns; there's over 120 ethanol plants across the U.S. now,” Gertken said, adding that we’re now seeing in the biodiesel sector what we saw in the ethanol sector 10 years ago.

“There's a lot of growth potential. Bunge is making active investments to be part of that and be part of the renewable diesel and the bio diesel part of the world. It's massively growing and we foresee that happening over the next handful of years.”

Looking to the future with the congestion currently plaguing the West Coast ports in mind, Lamie said she hoped to be back with the panelists in a few years adding to the dialogue about cleaner and ever more efficient ways of moving freight by highlighting advancements that will have been made in the Container-On-Vessel initiative that would have patented new vessels transporting anywhere from 1,800 to 2,000 containers at a time from the St. Louis region to the Gulf of Mexico.

“It's an alternative that would support the supply chain. And I think that's one of the innovative things that we need to do as a nation, is to think differently on how we can better compete.”