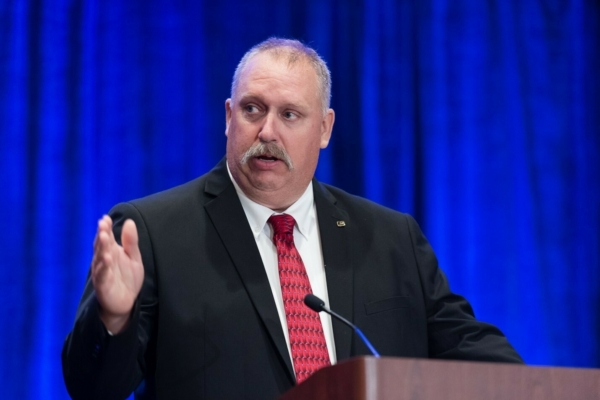 The U.S. Grains Council (USGC) brought members together in Sacramento, CA, this week for its 62nd Annual Board of Delegates Meeting, focusing on major market challenges and recent organizational successes.

USGC Chairman Chad Willis began the meeting by welcoming attendees and sharing a preview of the conference before establishing the focus of the day’s meeting.

“My theme for this year, Together in Trade, reflects both the opportunities and challenges of the current environment,” Willis said. “At this meeting, we gather to discuss issues facing our industry and explore future demand for feed grains, distiller's dried grains with solubles and ethanol around the world. Our focus will be on current events and trade policy, what the near future may look like and how trade may be affected.”

On Monday, after a welcome from Council President and CEO Ryan LeGrand, the nearly 250 attendees listened to Dr. Yuval Weber of the Brute Krulak Center for Innovation and Future Warfare at Marine Corps University present on the history contributing to the Russia-Ukraine war, its long-term implications and what this means for USGC members.

Angela Hofmann, a vice president of international trade and supply chain resiliency at Sandler, Travis and Rosenberg, shared her view on major shifts in the trade policy landscape and what the situation in the Black Sea means for trade policy.

“Fourteen percent of the world’s grain exports come from Ukraine,” Hofmann said. “Eight to 13 million people could be affected by food insecurities caused by the Russia-Ukraine conflict.”

Hofmann was followed by Dr. Antonia Broyaka, a Kansas State University professor and Ukraine native, who shared some of her personal story as well as her research on potential global food shortages as a product of the conflict.

During the morning general session, USGC Vice President Cary Sifferath gave an around-the-world update on Council activities in markets in which the organization has a presence.

“The Council has done a great job of establishing connections and relationships with industries and governments abroad,” Sifferath said. “As the industries have changed their focus, the Council continues to adapt with them on behalf of developing markets, enabling trade and improving lives.”

Following Sifferath, attendees heard from selected directors and managers who shared Council success stories from around the globe.

In the afternoon, attendees began work on USGC’s strategic plan, a guiding document that will help direct the Council’s actions over the next few years. Led by USGC Director of Strategic Initiatives and Engagement Melissa Kessler, attendees discussed the priorities of each stakeholder group and how the plan should evolve over time.

Throughout the week, the organization also held Advisory Team (A-Team) meetings, allowing members to offer input and set priorities to determine the Council’s course of action over the coming year, and member sessions including agribusiness, general farm organizations, barley, corn and sorghum sectors that took up issues of importance about the commodities the Council represents.